Quality is
No Coincidence.

Bob Dougherty, "Mr. Unsinkable," used to joke that he would be six feet tall if it weren't for all the years of rigorous testing on the water. Though he's not throttling hard into the breakers himself anymore, Bob made sure the Everglades team put each new model through plenty of grueling runs in all kinds of weather and sea conditions. It's part of Everglades' commitment to safety.

Every industry has them, the uniquely gifted icons at the forefront of innovation. In the marine industry, that icon was Bob Dougherty. In 1960, he joined Boston Whaler where he was key in developing the unsinkable hull. During his 30-year tenure he perfected the process, introduced the first V-bottom Whaler, invented the first center console, and became Senior Vice President of Product Development and Engineering. In 1999, Bob Dougherty took the foam-filled hull process even further, by molding the structural foam separately, then building it into the hull, rather than injecting it blindly. His Rapid Molded Core Assembly Process -- or RAMCAP -- won him the Marine Manufacturers Innovation Award in 1999 and revolutionized the way boats are built.

Kathy Bohanan Enzerik All At Sea

In 2001 Bob Dougherty was ready for a new challenge, and Everglades Boats was born. Over the last decade the product line has grown, including center consoles, cabin models and dual consoles, measuring 23 to 43 feet. Today, RAMCAP is still the core of every Everglades hull. With over 50 years of dedication to innovation in boat building, the Everglades team continues to impress by producing the finest family fishing boats on the water.

"When you're out with your family in 10- or 12- foot swells, you don't want to have a boat that was made by the lowest bidder." 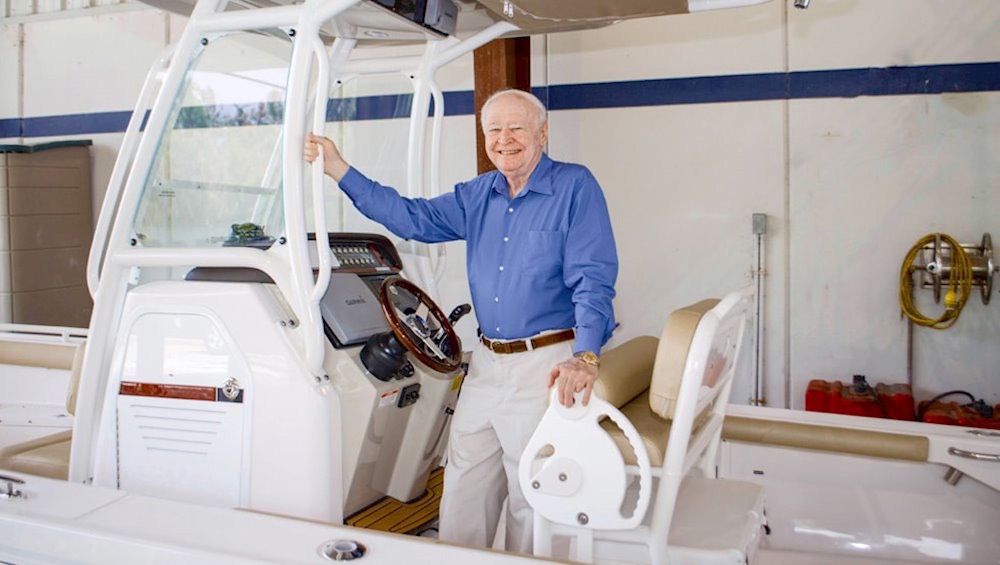 I first interviewed the irrepressible Bob Dougherty more than 20 years ago. He had retired from Boston Whaler in 1990, after 30 years of involvement in every Whaler designed since he began working for Dick Fisher in 1960. Fisher and Dougherty were bitten by the fiberglass bug of the late ’50s, but went in different directions.

Following in his father and brother’s footsteps, Dougherty became a teacher in the 1950s, teaching industrial arts in Boston’s public school system. Bemoaning his small salary, he began working for Brunswick Manufacturing (not the same Brunswick of today) in 1959, when the company had 15 employees in North Quincy, Massachusetts, making medical devices such as artificial eyeballs and hips. Arthur Godfrey had his hip made there.

At the same time, Fisher, along with naval architect Ray Hunt (that name again!), started experimenting with a foam-filled fiberglass sandwich boat based on the 1913 Sea Sled design of Albert Hickman with refinements to the basic shape that made the boat ride softer.

Fisher and Dougherty met at the 1960 Boston Boat Show and decided to partner. During the ensuing 30 years Dougherty evolved the Whaler concept from nine feet to 27 feet, constantly tweaking and improving the ride.

We use cookies and similar software tools such as HTML5 Storage or Local Shared Objects (together "cookies") to identify your interests and particularly popular areas of our website and use this information to improve the design of our website and make them even more user-friendly.